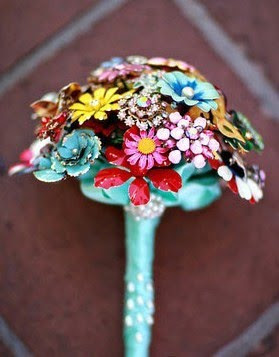 Here are a few samples.  Mine will probably not be that big unless i break the budget and buy a lot more pins.  I love the colorful ones but at the moment I'm attracted to only gold and pearls so probably the last on the right will look most like my finished product...at least in theory.

I have to pick up some floral wire and get blooming!
Posted by Amy at 5:47 AM 7 comments:

"Just because this is never going to work, there's no need to be negative."

Yesterday I got out of work a bit early and instead of rushing home to my doggies I took twenty minutes for myself at the antique store and bought vintage brooches and earrings to make my bouquet.  the tutorial says you need 60 pieces but I'm going to see how 20 works because I'm cheap.  If I can't do it under budget I'll sell all the pieces and get the adorable paper flowers on etsy.  I'm also thinking of doing pretty ribbon and cheaper pearl pins to fill in the difference but i guess we'll have to wait and see how that works.

I have a vacation coming up next week and as Rebecca reminded me I have 1000 projects to work on.  This bridal bouquet is not the most important but I also don't want to leave it till the last minute.  I'm putting a lot of time on what i'll be wearing and not much else.  I still need to find a photographer and someone to you know actually marry us, but obviously the homemade brooch bouquet is more important.
Posted by Amy at 6:42 AM 3 comments:

"You really need that much butter?" Screw you, frying pan."

this morning we picked blackberries.  I hope we beat the bears to the rest of them but for this morning we have enough to make muffins.  it's been a lot of work keeping up with the garden this year.  we have so many sugar snap peas to cook that i'm seriously losing my enthusiasm for them but there are still more! More! More!  I'm going to be canning tomatoes for my whole vacation because they are all going to ripen at exactly the same time and there are at least a hundred.  i know, poor me, but my vacation is shaping up to be a house wife extravaganza and not all that relaxing.

"have you seen my drawer of inappropriate starches"

A few weeks ago I set myself a very small goal of doing some pilates every single day.  Initially the goal was to do some pilates every day until my wedding, and then until my reception.  Really I need to do some pilates every day forever but that seems more possible when I break it down.  I don't always have time to do the whole regimen and I haven't expanded my pilates repertoire the way I once did, learning new challenging routines.  My real goal isn't to lose a hundred pounds, it's to keep my rotator cuff strong and stretched and to never have it seize up in pain again.  The shoulder thing has happened at least three times this year which is a truly unacceptable number, it takes weeks and weeks of pain and zero accomplishments to get over it and I'm committing myself to preventing that for a whole year because there is just too much to do.

I'm actually pretty happy with my weight and such right now.  my real priority is to stay loose and strong.  garden work has been kicking my ass this year along with the other ways I've been neglecting myself lately.  I found that I fit into a jean skirt I didn't think I could wear and a size medium t-shirt I had thought should go to goodwill so I'm pleased with the overall direction.  I've known a few brides who did nutri system or south beach for months before their weddings but we're not planning the kind of wedding that involves hundreds of people staring at you so the pressure is a bit different.  I'd love to be trim in all my photos but hell, if I ever get genuinely thin we'll just take more pictures and have a parade or something...can't live your life waiting to be thinner.
Posted by Amy at 8:20 AM 1 comment:

"I'm a little preoccupied. I almost killed a man in the basement."

so far today matt has watched almost all of his farm vehicles break down and he's actually taking it quite well.  The dump truck lost an axle, the skidder is leaking fuel and something very bad happened to some welds on the back hoe...he parked the bulldozer for it's own protection and is finishing the foundation work with shovels because he just can't take anymore.  I'm having a much better morning.  I cleaned everything out of my cabinets, washed the shelves, and put it all back again.  it's one of those things that shouldn't feel productive but totally does because now i can open any door without spices and brown sugar falling down on me.

tonight i'm preparing my fourth meal in a row of snow peas.  I love them but it is getting a bit old.  i am very much wishing i had frozen them all the day i picked them which is apparently imperative in their preservation.  i think i'll risk it next time though because i'm so over snow peas there aren't even words.  it is kind of a prescription for healthy eating because stir fries aren't that bad for you if you keep the soy sauce down.  I'm also using up all my noodles from the chinese market.  there might well be an expiration date but since it's in chinese i've been ignoring it but it's probably better to use it all up.

things are going well enough with keeping those pounds off.  i haven't quite gotten down to 180 where i'd like to go but i haven't ballooned back up which is a huge relief.  i'm changing little things like sugar where i don't need it and less sweet baked good for matt's snacks.  instead of cookies and cupcakes i'm making muffins and soft pretzels.  still a calorie rich snack but we both feel better if the sugar content is just a little bit lower.

i'm getting nowhere on my wedding decisions.  I just can't make up my mind on anything.  matt and i are in a bit of a limbo because of some of things happening with his business.  it could be really awesome or really, really bad.  it might turn out for the best if everything is in my name and we're not married but it hasn't come to that yet so fingers crossed for awesome.
Posted by Amy at 12:17 PM No comments:

while i was home my sisters and i were talking about marriage and weddings obviously and my sister said something that really made sense of my childhood.  She said she never knew you were supposed to like the person you were married to.  maybe that is why i've never had the wedding fever so many women my age have had.  i had never really considered marriage until our relationship became such that it seemed the more practical thing to do, we have the partnership with or without the paper...the paper allows us to be there for each other officially and it means i don't have to get rental insurance in my own house and also the presents...  it never really occurred to me that i might have permanent scars in my brain where the big fat white wedding gene should be because of my parents but it makes total sense.  fortunately i like matt, i love him too but even more important i like him and i don't expect either of us to spend 40 years being passive aggressive and staying just for the money.
Posted by Amy at 8:56 PM No comments:

"When you think about it, shouldn't you be thanking us for making mistakes?"

My sister says that planning a wedding is one of the top five stressful life events, up there with losing a spouse and moving.  So that is the reason i haven't gotten anything done this weekend.  Actually the wedding stuff is pretty minimal in far as actually doing work, we just have a lot of decisions to make.  I just got distracted looking for farms to rent as wedding venues so we don't have to bust ass on our own by next summer.  It's hard to decide if we're more interested in being lazy or cheap.  Hard call.  Still a terrible excuse for not getting the dishes done.
Posted by Amy at 6:38 AM No comments:

"have you seen my drawer of inappropriate starches"

I've eaten like a ridiculous amount of chocolate today.  I couldn't muster enthusiasm for any of my chores so I ate chocolate instead.  Mostly lately that hasn't been a problem but today I'm just tired of traveling and being behind on my chores and i should be using today to catch up on said chores but i just can't.  which means i'll have to do it all tomorrow.  I was talking to my sister on the phone and she said that planning a wedding was one of the most stressful things you can ever do, up there with moving and losing a spouse.  That doesn't really seem like a reasonable excuse for my laziness and chocolate scoffing but i'll take it.
Posted by Amy at 9:44 PM No comments:

"Actually I'm gonna wait until the bus stops and then I'll get off."

So when I told my dad we were going to get married he said "oh, ok" so I put it on facebook to get some positive feedback and give him an opportunity to see how to respond from other people.  I guess we'll see how that goes.  I guess it could be worse, he could have been really mad or something.  In that light I guess it's really positive that he was indifferent.
Right now I'm supposed to be washing dishes but instead i wrote a big long thing about how matt's parents want us to share our garden with his brother for no good reason.  I guess they need the help but they have plenty of land and you know, dirt, so in theory if they were hungry they could like bust their own asses and plant a garden.  We plant a lot of food so we can have it all winter or sell it to feed the chickens.  We don't plant all those seeds so other people can have cable and nights out.  And you know, she throws away anything that's in her freezer too long and I didn't break my legs planting seeds so someone can throw away our food.  whoops, i did it again.  Matt's parents think we should grow a bigger garden so we can share.  no no no, I'm not killing myself forever for ungrateful assholes.  And that's why we aren't sharing our news with them just yet.
Posted by Amy at 7:58 AM 3 comments: