"Only men you can count on these days are Ben and Jerry." 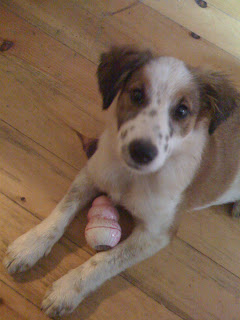 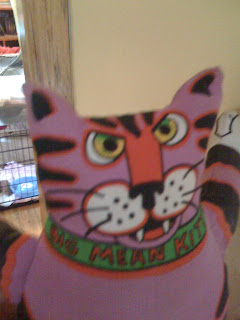 This puppy likes toys. Knox likes toys too, but he'd much rather chase Jolie around the yard and before her he enjoyed tackling Matt. Neither of them like Big Mean Kitty as much as I do. There were three angry kitties to choose from, the other two were Awful Mad Kitty and Dirty Rotten Kitty. They're all hilarious and if I'm not very diligent with my budget I will end up buying all of them. I have a real weakness for dog toys but it is certainly better than having doggies eating the furniture and shoes and EVERYTHING ELSE. Little one likes shoes a lot so I try to keep really awesome toys everywhere. She tries to drag Matt's boots to her lair but they're a little too heavy. She's big into stealing. She takes pot holders and kitchen towels and all of the bones, her bed is now two feet taller than it used to be.
Posted by Amy at 4:07 PM

Aww your puppy is adorable. Your stories make me miss my pooch who's been living with my bf 400km away since June. I see him often but I still miss him :)