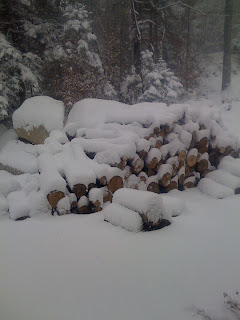 Firstly, it's been snowing all day and the weather channel says it's clear and windy. Not even thanksgiving and the battle begins. I was supposed to do some tipping and some wreathing...I have serious craft fair homework and so far I'm failing. I'm getting an F in craft fair. I think I'm getting an A in flattening birch bark though. I have a big damn piece drying in my bathroom under some ridiculously heavy steel weights from Matt's machine shop. Matt originally suggested using the iron but I'm pretty sure the indians sent theirs to the dry cleaner so I'm giving this method a whirl. It's supposed to be a sign for our booth but maybe we'll make a canoe for old times sake.

Pajama party '08 is coming along well, the second gown is officially done. I thought I liked the flowers better, and then the ice cream, and now I'm not so sure. Any votes? The seams are a hell of a lot straighter on this set though, which is good because finding crooked children is a pain in the ass. 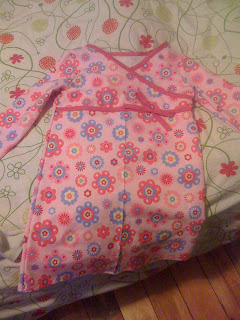 doe...so in the same craft fair frenzy yuo are.

any luck with etsy?

Dude, tell me about it. It was like 61F when we went for a ride this morning. Luckily, we were able to thaw out and chip the ice off on the way back since it got up to 75F.