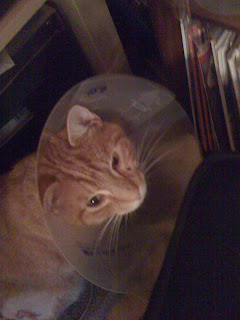 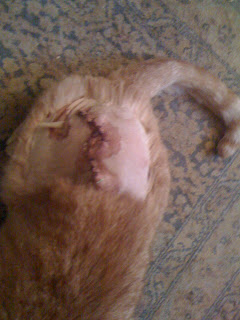 I was supposed to be finishing turnipalooza last night but instead we came home and while preparing to take the woofers out Leo ran in and was missing a very big chunk of his back haunch.  Matt grabbed him and put him in the carrier and i got my bag and swept him off to the emergency vet.

It looks like he survived a very unpleasant meeting with a fisher cat or a fox.  He's bruised everywhere and has lots of scratches in addition to the huge bite on his back.

The whole time he didn't cry a bit and hopped all around like he didn't have a hole in his person.  He does not however like the cone very much and he has to wear it for two weeks.

Jolie, his bestest friend, sat outside his crate last night crying.  We let him out today and they're sitting on the bed together.  Knox keeps trying to chew the collar but so far no one is trying to lick him anywhere he isn't supposed to be licked. 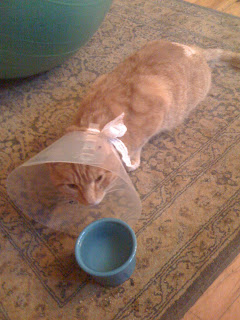 I spent the whole night at the emergency vet and we had the honor of being the most horrific case there that night.  Some folks with a golden retriever covered in porcupine quills looked absolutely faint when the doctor told me about his wounds in the waiting room.  I probably wouldn't have fainted too if i wasn't so hopped on adrenaline.  Poor Baby Paws!
Posted by Amy at 8:52 AM

your life is never dull..

I'm still petitioning for the Real Housewives of Maine!

Wow, you're lucky your cat is still alive!

We are very lucky he's alive. he actually doesn't seem to mind having a GIANT hole in his side. The painkiller is also a sedative so he spends most of his time laying around under the blankets.

A question for you. Bear in mind that I'm not up to date re wedding trends. It is hereditary. Tried to describe your wedding bouquet to my mother. She listened intently, then frowned. "So, when she throws the bouquet, doesn't it hurt someone in the crowd?"
Question: does the modern bride throw a bouquet, and do people get injured?

I don't have any traditional plans to throw it. it would definitely kill someone. A girl i read about who had a fan instead of a bouquet had the same idea that she would kill someone with it so she threw a mini plush corgi instead. can't wait to see how your mom takes that.

i suppose they lived and learned