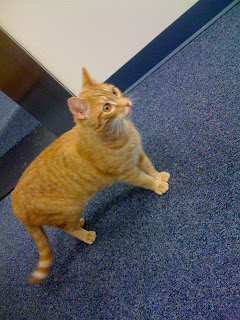 This is a picture of his first day at work.  He has huge amber eyes which make him look permanently surprised...like he had a bad facelift.  It's hard to tell how tiny he is in this photo but holding him is like holding air.  He just stole a candy cane I didn't even know we had and carried it into the bedroom and now he's napping with the dogs...he's definitely one of the gang.
Posted by Amy at 8:53 AM

I added a picture...made me realize I haven't taken any at home. I'll have to get on that!