"You're never happy unless you're making my life complicated, are ya."

This is my puppy.

This is a porcupine. They're really getting on my nerves. 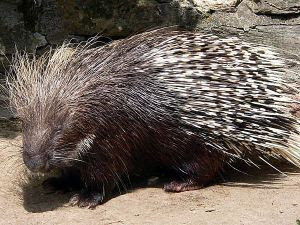 The first time we had an encounter with a porcupine the victim was Knox and he had a half dozen quills in his nose. The porcupine was dead so there wasn't much of a fight and Knox learned his lesson easily the first time. He was a patient patient and I pulled out the quills and it was no big deal. A little while ago the same thing happened to Jolie only the porky was live and angry and she had about two dozen quills and she was not a patient patient. It was AWFUL pulling out her quills. There was crying and fighting and blood and Matt punched some woodwork and the whole time Knox wanted his butt scratched. It sucked. I had very much hoped that Jolie would learn that porcupines are sharp as easily as Knox did but no. Not so much.

This morning in the middle of our run Jolie and Knox ran after a noise. They do this 3-4 times a walk during 3-4 walks a day every day. So...when they don't come back promptly mostly I'm just irritated and I don't necessarily think there is something wrong. When I do think there is something wrong I stomp into the woods and it's a pain in the rump and then the doggies happily follow me out. This morning I didn't follow them in, I just kept walking and then got grouchy when Knox showed up and not Jolie. Grouch Grouch Grouch...all the way home...a mile and a half. That's how far she had to run to me with 20 quills in her leg. She had a terrible limp in addition to the dozen quills in her nose and mouth.

I called the vet from the woods and carried her home. I feel like the worst dog mom ever. The vet sedated her and did everything she could but there are still some quills broken under her skin. They won't go searching surgically unless the quills don't work themselves out. All the drama happened at 7 am and we got home after 10, she's been sleeping ever since. I hope she learns that porcupines are no fun because my guilt can't get ramped any higher.
Posted by Amy at 1:08 PM

Oh, the poor puppy! And the poor Amy!

Also, dearest Amykins, I received the package with the absolutely precious teacup and saucer. I love them. Unfortunately I was in Arizona all last week and by the time I got home the brownies had died the death. Totally appreciate the effort, though : )

i saw that on facebook and i was like "uh oh". It did not occur to me at all you might not be chained in your mom's basement on your birthday.

I never thought I'd get on a plane again, but I sucked it up and made it through four separate flights without freaking out. I'm quite proud of myself, actually.