"you made a face like you had an irritable bowel experience"

I accidentally walked 10 miles today. Puppy and I were supposed to take a short, five mile walk around Parkman mountain. It sounded really great except I didn't take my map with me and we ended up, uhm, very far away from where we started. Here is the map. I started at the 198/3, can you see it...below the Somes Sound label and left of the Jordan Pond House label...there it is. See all those little dashed lines..there's a small loop that goes out and comes back, that's where I meant to walk. We didn't do that. Somehow I missed a marker or took a wrong turn and based on the markers I remember, I walked almost every one of those trails. We went out toward the pond house, down to the Asticou, up again back to the pond house label and down again and then back up to the Bubbles where I realized HOLY SHIT those are the friggin' Bubbles. 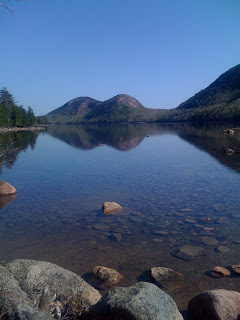 The bubbles rock, that's them...taken from the south end of the pond...but I saw them and OH MY GOD I did not want to see them today. Some very nice cyclists passed by and they had an extra map that they shared with me. It was only about five more miles to go all the way back to where my car was but five is a lot when you realize you're lost in the middle of a national park with no food and no water left. I made a command decision to turn tail and run to the Jordan Pond House.

I took woof into the women's room with me because the water fountain wasn't working and we both needed water. Some of the tourist popover eating women looked like they were about to say something before they saw the crazy in my eyes. I'm sure it's against the rules to have a dog in there but I was projecting end of her tether at 100 decibels, I'm pretty sure. We got some water and I scared the hell out of myself in the mirror, and then I called Matt and he said "what do you want me to do? Steal a car and pick you up?" Yes, exactly...so his carpool buddy gave him a ride to fetch us. If I'd had money I would have got a table and some tea instead of sitting in the parking lot trying not to cry but that's yet another thing I didn't have with me. Sigh.

I fail at hiking, seriously. The poor puppy had diarrhea twice, vomited once and broke his leash permanently. I was terrified that he would become really ill in the middle of even no-er where than we already were, I'd never be able to carry him back to civilization. The only things I can think of that didn't go wrong are A) my hiking boots rock, no blisters or pain B) it was freaking beautiful out today, not too hot or sunny C) no bugs. Also we saw some really beautiful bridge work I have no idea where and a very cute deer hopped onto the trail and bounded ahead of us for about a half mile, it was very nature tv. On the upside of everything, puppy is very asleep and might not wake up till sunday. He's so cute when he's sleeping.
Posted by Amy at 5:16 PM