This weekend I made my very first bagels. It was actually easier than I thought but it takes forever, which is something to remember when I'm whining about the price of really good bagels. I was trying to make pumpernickel, which are my favorite and also elusive, but I can't read english so they're more of a golden rye in color. They taste the same though, because they are pretty much the same barring the color.

These are some pictures of the process, boiling, sitting, preparing to bake and after the oven. 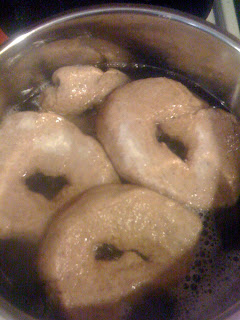 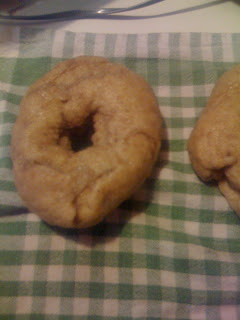 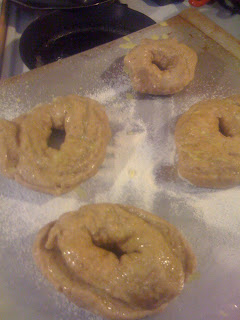 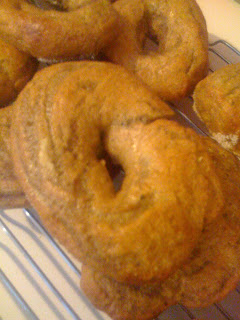 They came out better than I would have thought for a first try, maybe a little too chewy. I had intended to make a half dozen but the key to the color in this recipe is using molasses instead of sugar and I added the sugar anyway...so they're half molasses and there are twelve of them...apparently that's how I deal with a cooking crisis, make double of something that could be a waste of time. It's fine though, they're yummy and they're in the freezer. I tried butter pretzels a few weeks ago, which were awesome...and now yummy pumpernickel bagels, and now matt has requested donuts. Heaven help me if they are a smash hit...the last thing we need is a constant supply of kickass donuts.

I'm 3 days into 30 days of pilates. I'm trying out josef pilates' 10 times and you feel better, 20 times you look better, 30 times you're a nubile cheerleader thing. I have to gate up the puppy and he cries and cries, he really wants to do pilates too. I had been trying (ie. not very hard) to get back into pilates but recently my shoulder started to really, really hurt. It did the same thing three years ago before I started doing pilates at all and the exercise made it better so, I'm trying harder to save myself the agony. It also helps with my "tennis elbow", funny the benefits of taking care of your muscles. Anyway, I'll keep you all updated on the nubile cheerleader thing...personally I'll settle for not being in pain anymore but I won't say no to the other.
Posted by Amy at 8:39 AM

dude... have you thought of taping yourself? create your own little sitcom... something along the lines of.. Thrifty with Amy or something...

Those look great! I would love to try to make bagels sometime. That does look like a lot of steps though ;)

Good luck with the pilates and sore shoulder :(

you're funny with the sitcom thing, I should totally get a camera though...someday when I have a job.

they were really easy, you just need time.