A few weeks ago I was listening to the radio and there was nothing on. I was in one of those moods where you keep hitting the seek button until you get a repetitive motion injury because every song sucks and there has to be a better song if you just keep hitting the button. So finally I came to an oldie but a goodie, Boyz II Men. Of course it was Delilah because she is the devil and now I can't stop thinking about Boyz II Men. I downloaded three or four songs which probably cost more than their entire catalog on half.com. Motownphilly, back again. Yo. Apparently they're still touring, god bless 'em.

And as if it isn't embarrassing enough to admit I've been singing On Bended Knee all week, if you look to your right you'll notice some huge, home made and mostly unfinished pajamas I just found. In a fit of Project Runway excitement shortly after graduation I stole my mother's sewing machine. Why I thought neon fleece finding nemo pajamas would be my ticket to Tim Gunn's very stylish heart I have no idea but I just found the proof in a tote from my garage. It's sort of a shame they're not finished because god knows I'll never finish them now. Matt doesn't think they're his color. Shame. 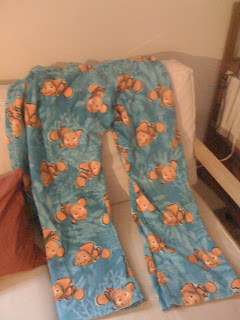 I found a metric ton of fabric I'll never use and mostly it's fleece. Fleece, the one fabric that will not go though my pilfered sewing machine. Those horrible pajamas were completely hand sewn and I've no idea what I'm going to do with all this fleece. I've moved it THREE times and finally I'm tired of storing it. Can you give fabric scraps to GoodWill or is that a bit much? I'm completely tired of storing unusable crap. I'd have so much more room for springform pans and bulk flour if I got rid of the fabric and the box of unloved purses and all that union trust crap my old boss stole from company parties. Good times.
Posted by Amy at 8:09 AM

Alexia @ The One Last Thing said...

If you can't donate, list it on Freecycle or Craig's List! People will snap the fleece up.

As for BoyzIIMen (did I spell that right?), my exchange students always go see them ;-)

Fleece is for blanket heaven! You can put an edging on it (like hemming or an easy zigzag stitch) but on most fleeces, you don't have to. I have a bunch of ugly fleece that I have never done anything but cut to size and I use it as blankets and throws during the winter.

both good ideas, but I really want it gone so freecycle it will probably be. NO MORE ROOM. Argh.

you know that was just for you!

If its a lot of fleece, give it to a shelter for blankets? Or a library/preschool for arts n crafts... that's what I do with all yarn remnants. And then I don't care if they throw it away, I just can't bear to.